(Most of the following comes from a forum post by Blues -Thanks Blues!)

Shares are bought 1,000 units at a time. So, if a player's share price is $40, it will cost $40,000 in cash to buy one of their unowned stocks (the grey stocks). When buying stock already owned by a player, the price is doubled. In this example, it would cost $80,000 to buy one of these stocks. The last five shares need to be purchased at once in a block, so $40 share price means you need $400,000 to buy out the remaining five shares. If you are splitting Player A with Player B you need to pay full price for the shares that Player B owns. If Player B owns five shares in Player A, then at $40 a share it will cost you $600,000 to purchase Player A. 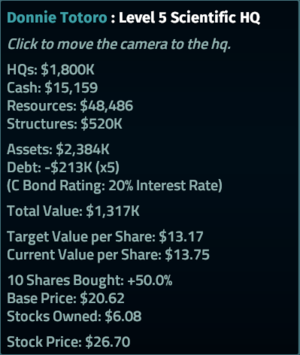 The base value of your headquarters. This goes up whenever you upgrade and is not tied to faction type, but is tied to the number of players, as follows:

Fairly self-explanatory, this is your cash on hand plus the total value of your resources if you sold everything at that moment. Do note the implication that when you spend cash, you're losing the stock value that it was contributing (though that's often just getting shuffled to another category). This includes any money/resources tied up in buildings currently under construction, researching patents or upgrades, initiating hacks, and launching things offworld.

A bit of an odder category, this comprises the value of resources invested into your buildings and HQ upgrades, though instead of using current market prices, these assets are calculated using twice the starting prices for resources.

From the moment a building is completed, it adds the value of the resources used to create it to your structures total.

The resource value of HQ upgrades is also included in the structures total, using the starting prices of these resources.

One important takeaway is that scavengers will have noticeably lower structure values than any other faction, with a penalty of $60 of structure value per steel required to make the building ($24k, or $0.24 in stock value, less for an offworld!) and a penalty of $0.18 in stock value from upgrade value at HQ5, relative to Scientific/Expansive. Robotic HQs will also lose a full $0.108 in stock value relative to Scientific/Expansive at HQ5. As of beta 10, the expansive half-steel-cost bonus is also reflected in the structures value, meaning an Expansive Offworld Market, for example, is worth $24k less than a Scientific or Robotic Offworld Market, and the same as a Scavenger Offworld Market.

This is just the sum of HQ value, cash, resources, and structure value.

Total value (TV) = assets - (debt*multiplier)
Your share price trends to your Target Value per Share, which is generally equal to TV/100,000. This isn't always true; past some value, there are diminishing returns on total value, such that your target stock value will be less than TV/100,000. The reasons for this are currently unclear.

Every stock bought in you above the minimum starting stock gives an additive 5% boost to your stock value, until all 10 stocks are owned, which is when the multiplier jumps to 50%. This means the last share has a disproportionate effect on your stock price, increasing this multiplier by 10% in 2-3 player games, by 15% in 4-5 player games, and by 20% in 6-8 player games.

The value of stock you own in other players. This value is based on the target value per share of the stock owned times the fraction of stock owned, so it does not include the effects of any of the modifiers in this section.

If there's a stock price modifier for your chosen difficulty, it's applied as a multiplicative boost after everything else is considered

You may sell any stock that you buy whenever you wish. The amount you receive for selling stock is roughly equal to 90% of your current stock price, with a stock bought modifier acting as if one fewer stock were bought than is actually the case.

Buying the first stock in someone will cost you an amount equal to their stock value*1000, lowering your stock value from cash by their stock value/100. At the same time, your stock value increases by their current stock value/10, which means money spent on the first stock is 10x more valuable for your stock price than the cash used for it. Even in the worst case, with 10 stocks bought in someone (bringing the +50% multiplier into play) and needing to pay double price for owned stock, the stock is 3.33x as valuable for stock value as the cash equivalent (i.e. you'll gain $2.33 in stock value for every $100,000 you spend on stock in this scenario). On Manager difficulty, paying debt will add $5 to your total value for every $1 you pay, meaning that every $25,000 of debt paid adds $1 to your stock value (paying off $25,000 in debt raises your stock value by $125,000, but it costs you $25,000 cash to do that, leaving a net gain of $100,000 in stock value, or $1 in stock price). With 10 stocks bought, that becomes $6.00 per $100,000 of debt paid, which means paying debt is six times as valuable for your stock price as holding cash. Therefore, buying unowned stock (the worst ratio will be in a 3-player game with 9 stocks owned, giving a net gain of 10/1.4 - 1 = $6.14 per $100,000 spent) will always be better than paying off debt if you only care about raising your stock price in the moment.

With all stocks owned, paying off $25,000 in debt increases your stock price by $1.50, as mentioned above. This means that your opponent will need an extra $3,000 for every share he needs to buy, which will be a minimum of 5. If you're making equal amounts of money, you must own at least nine stock in yourself for this to pay off.

For simplicity's sake, let's say you're paying debt down immediately before an interest tick and this one day is all you're considering. If you're still stuck in D debt after paying down debt, every $100,000 of debt paid will keep your stock price $7.80 ($6.00*1.3) above where it would've been with the interest applied. You must own at least seven stocks in yourself. If you manage to pay down exactly enough debt to get to a C rating, assuming a 2.5m asset value (which would be roughly accurate for the late game in a 4-player match), you'd be saving $1.875 in stock value from avoiding the higher interest rate alone (difference of 10% interest on 250k debt, with no offsetting cash cost). The breakeven point will depend on how much debt you had to pay to get back to the C rating. For example, if you paid $100,000, you would gain $9.675 in stock value. Assuming again that your income is equal to your opponent's, you'd need at least six stock in yourself to take an advantage from paying this amount of debt. Any further debt payment would have smaller returns, as the avoided interest is lower and moving up bond ratings both has smaller effects on interest rates and affects a smaller amount of debt.

So based on this analysis alone, my go-to panic move of paying down all my debt when I'm in trouble may be costing me. That said, the common rule of thumb to only pay down debt if you own all your stock seems too conservative.